Posted by rashbey on June 28, 2020 in Uncategorized

There are times when we are really glad of a walled garden and the extra warmth and shelter it provides. Not this week! Working outside in an environment with little shade has been challenging to say the least, but we have cooler conditions to look forward to next week thankfully. We have also passed the midsummer solstice, when growth starts to slow down and gardening feels less like a frantic game of catch up. A bit too soon to put our feet up though!

Vegetable and fruit production on the community garden is in full swing and we have been loading the new veg barrow with fresh produce each morning. It is proving very popular with our picnicking visitors, although most of what we have on offer requires a bit of cooking before it can be added to the hamper!

It has been lovely to welcome back our WRAGS trainee to the garden in the last couple of weeks. Yvonne has been extending her lockdown hairdressing techniques to the Bay estrade in the Nosegay garden. 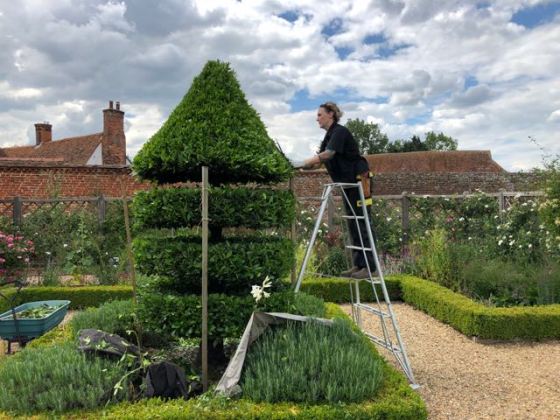 Ah, much better! This was one of the first tasks Yvonne tackled when she started with us in June 2019 so it is great for her to get a second go as her year’s training has been extended a couple of months due to the shutdown in April and May. 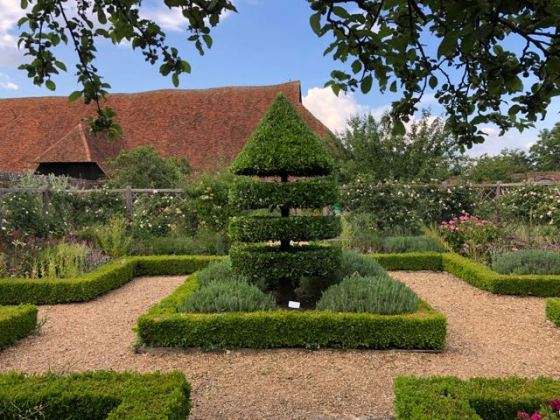 Topiary and various methods of training and staking plants was a very important practice in medieval gardening. It was understood that to produce fruit and flowers the natural exuberance of plants had to be quelled by judicious pruning of ‘superfluities’. Pruning and shaping for aesthetic reasons reached great heights in medieval topiary in the form of a tiered ‘estrade’ or cake stand shape, like our bay tree.

Controlling the exuberance of vines through careful staking with Alder poles and pruning excess growth was just as important to medieval gardeners as it is to us today. Cutting the excess growth of the pole vines back to two leaves past the last fruit cluster has been another job that Yvonne has helped us with recently.

Midsummer is a good time to inspect fruit trees for pests and diseases and carry out fruit thinning if necessary. The apple crop in the Jubilee orchard looks to be very poor this year, with many trees bearing little fruit and several suffering from bad attacks of winter moth.

Winter moth is a name that can be used for a number of species that have adult moths that emerge and lay eggs between November and April. These moths all have wingless females that emerge from pupae in the soil and crawl up trunks to lay eggs on branches. The caterpillars of these moths hatch in the spring as buds are opening, feeding on most types of tree fruit and many deciduous trees and shrubs.

In an organic garden a certain level of such pest damage should be tolerated because the moths are an important part of the garden ecosystem, with many birds, especially tits, relying on the caterpillars to rear their chicks during the spring. Encouraging predators and natural enemies into the garden such as birds, hedgehogs and ground beetles is an important  method of natural control but in years of bad infestation it may be necessary to take further preventive action in the form of sticky grease bands or barrier glue applied around the trunk of each tree in October to trap the wingless females as they ascend to the canopy. It looks like this may be necessary for our trees this year, to break the cycle of infestation.

I am sure a peacock would be a useful form of control for soil dwelling pests but I’m not sure our willow peacock will be much use in that regard! He does look rather fine though, now he has taken his position as guardian of the knot garden. 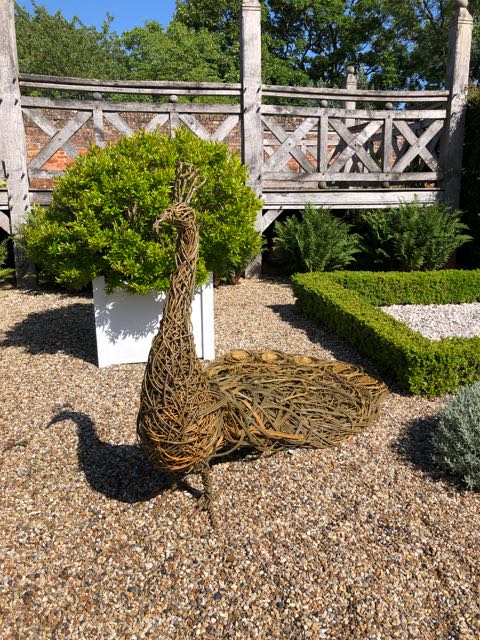 He is best admired from the vantage point of the viewing platform where the beautiful tail can be seen to best effect. 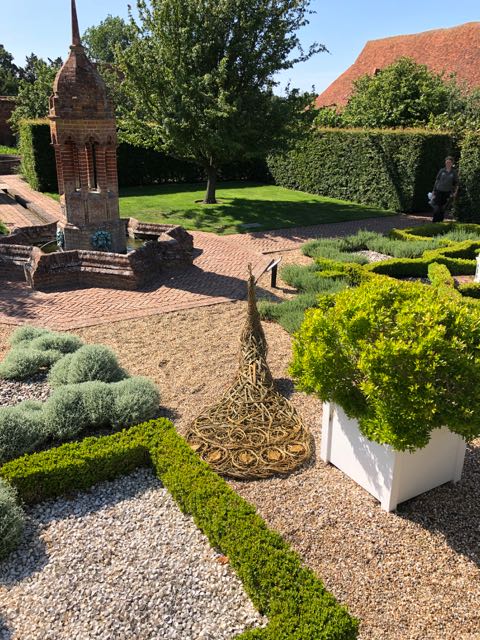 The peacock joins our other two willow sculptures to help evoke the spirit of the garden 400 years ago. Peacocks were a familiar sight in grand Tudor gardens but not purely for their ornament as our one is. Peacock Royal was a popular dish at high society Tudor feasts: a peacock was skinned, stuffed with dried fruit and spices, cooked and then placed back inside its feathered skin and placed as a centrepiece of the feast table. I expect our peacock thanks his lucky stars he is made out of willow! Our Tudor sculptures were made by talented willow artist Jo Hammond from Suffolk. See Jo’s website if you are interested in her other work.

Whilst checking for pests and diseases on your fruit trees is a good thing to do at this time of year, fruit thinning is another important task (if you have any!). The apple trees in the walled garden are doing far better than the ones in the Jubilee orchard and many are heavily laden with overcrowded fruit.

Trees naturally undergo a period of fruit shedding following flowering and this can be over a prolonged period up until mid July. In some trees there is still a heavy crop of fruit after the June drop, the extra weight pulling down on the branches considerably and risking them breaking. A tree is unable to support a really heavy crop and the resulting apples are likely to be small and of poor quality. Deliberate thinning of the fruitlets produces better-sized, ripe and healthy fruits, albeit in smaller numbers. The idea is to leave just one or two fruit per cluster, removing any misshapen, blemished or poorly positioned fruit and leaving the strongest and best shaped.

When explaining our type of gardening to visitors I sometimes describe what we do as ‘growing weeds nicely’ and this phrase came to mind when I was working in the potager this week. Take this plant for example:

It is Prunella vulgaris or self heal, a plant you are most likely to know as a weed in your lawn, which you either mow off each week which results in no flowers or you pursue it with your lawn weedkiller. But grown in a border in good garden soil and treated to an occasional watering it can reach two feet in height and look rather attractive, as it did with a bit of backlighting in this picture. Called self heal or all-heal from its reputation as a panacea for a wide range of medical conditions, it was the primary treatment for diseases of the mouth and throat, whether sore tongues, swollen glands, tonsillitis, mumps, goitre or laryngitis.  John Parkinson (1567- 1650, master apothecary, herbalist and gardener) recommended self heal for headaches, mixed with oil of roses and rubbed on the forehead and temples. In modern medicine it is effective against viruses including HIV and viral hepatitis and has an antibiotic effect against a range of bacteria. One wonders what ‘weeds’ might be out there that could assist in our struggles against more modern viruses.

Another common lawn weed looking rather fine in our potager beds is the plantain, in this case Plantago major rubrifolia.

This has a long history as a healing plant, especially for pain relief. One of its common names ‘ Englishman’s foot’ comes from its wide oval leaves and the ease with which this vigorous weed sprang up in any place to which colonists unwittingly carried its seed. Another of its common names, Waybread, comes from eating the leaves and roots before a journey as a means of filling the stomach. I wasn’t desperate enough to try it this week!

Around 40% of the UK’s insects species are beetles with over 4000 species! With bees and butterflies often getting the headlines, perhaps it’s time for us to pay more attention to this fascinating group of insects which have a major part to play as pollinators of numerous plant species, predators of garden pests and decomposers of organic matter.  See which of these common garden beetles you recognise.

When coming across caterpillars in the garden it can be useful to know what they will turn in to before deciding whether to feed them to the birds or not! The following photos show 4 from this list of 6 moths, but which is which?

And now here is a list of 6 butterflies, 4 of which are shown in the photos. Can you match them up?

Plant of the Week 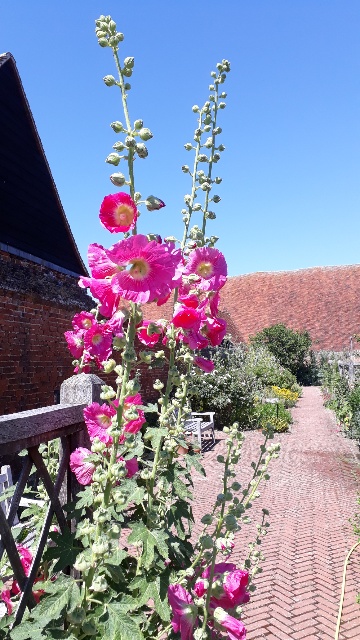 The much-loved hollyhock was brought to Britain from the Orient at the time of the Crusades. This cottage garden favourite pops up in various places around the garden and they are a glorious sight at the moment.

It is a member of the mallow family and its common name of hollyhock is believed to be derived from the Anglo-Saxon term ‘holi-hoc’ or holy mallow. It was used medicinally against lung disease and bladder inflammation.

Hollyhocks prefer a fertile well-drained soil in full sun. They are susceptible to rust disease and plants should be replaced after a few years, to prevent a build-up of disease. Collect all dead and diseased tissue at the end of the season to reduce the carry-over of rust spores to the next year. There’s just about time to direct sow seeds now, or wait until the autumn.

Jobs for the Week

It’s your last chance to plant out vegetables such as runner beans, peppers and squash which will enjoy the summer heat – provided they get well-watered!

Many roses have finished their first flush of flowers now. After deadheading, give the roses a feed to boost growth and encourage more flowers later in the summer. Use a fertiliser specific to roses, or one high in potash (such as a tomato food). A fertiliser high in nitrogen will result in soft, sappy growth that is more prone to attack from pests and diseases.

Herbs which have finished flowering may need cutting back now (unless it’s something you are growing for the seeds of course). Chives can be cut back to the ground to get fresh leaves. Lightly trim thymes after flowering to encourage a bushy growing habit. Rosemary should also be pruned now to keep its growth bushy and compact.