Lengthening days and signs of spring

Posted by rashbey on January 26, 2018 in Uncategorized

It may seem that we are still firmly in the grip of winter, still waking up in darkness, peering out onto a gloomy lifeless scene and making decisions about how many layers of clothing are needed or which waterproof to take. But look a little closer and you soon realise that some plants are feeling a little more optimistic and have decided it is time to have a tentative peek at the world.

Here are a few signs of spring, spotted at Cressing yesterday.

Usually the first to flower, the winter aconite (Eranthis hyemalis) is a cheery sight. Looking like choirboys with their ruff of leaves, these flowers have been known and loved in Britain since at least 1597 although they should be treated with caution like all members of the Ranunculaceae family because they are very poisonous. In 1822 a certain Mrs Gorst died after eating a tuber, having mistaken it for horseradish!

Next are the wonderful catkins, or lambs tails,  of the hazel (Corylus avellana), waiting for the wind to distribute its pollen to the tiny red female flower which is harder  to spot.

The hazel has been growing happily in Britain for the last 6000 years, having been one of the first species to recolonise our land after the last Ice Age. During that time it has been one of the most useful woody species we know, having two invaluable qualities. Poles can be split lengthways and then twisted and bent at sharp angles without breaking, making them the perfect material for weaving and use in all manner of construction from wattle and daub to fencing and hurdles and even for pegging down thatch. And it is not just ancient craftsmen that found a use for this versatile timber. More recently, Hazel screens have been used to reduce motorway noise, ‘mattresses’ of hazel have been used to fortify the banks of the river Ouse, and gardeners everywhere still use humble hazel rods for pea and bean sticks and walkers for walking sticks.

This time of year would not be complete without the mention of the much loved and well known snowdrop (Galanthus ssp).

Galanthus nivalis, or Candlemas bells, are what you might think of as an archetypal British wild flower. But all is not straightforward with the history of the snowdrop and it may not even be a native species. It grows wild on the continent in damp woods and meadows but is unknown in Scandinavia and colder Northern Europe, despite having leaf tips specially hardened to pierce frozen ground. But they were not recorded as growing wild in Britain until the 1770’s and they failed to generate much enthusiasm amongst early gardeners here. They are one of few naturalised species not to get a mention by either Shakespeare or Chaucer and it was known as the unromantic ‘bulbous violet’ until the name snowdrop appeared in 1633. Considering its near obsessional popularity amongst collectors today one wonders what our medieval forebears were missing.

Whilst things in the garden are still relatively quiet at Cressing there was more of a commotion at the Community Shed on Tuesday when it held a grand opening, attended by what seemed like hordes of people, making our large Shed seem suddenly rather cosy. 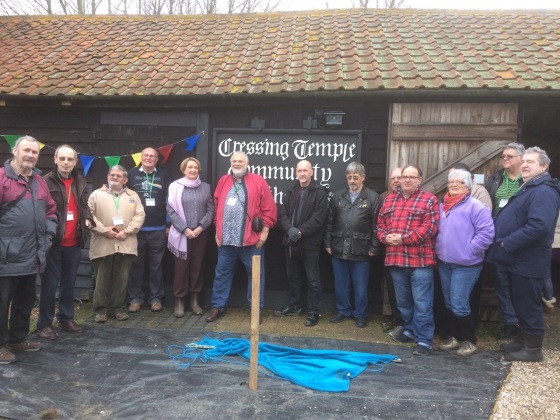 The grand unveiling was performed by two Councillors from Braintree District Council, assisted by Bob Adams, chairman of the Cressing Community Shed and was watched by a good crowd of hardy Shed enthusiasts.

Inside, many items were on display to give inspiration to budding shedders and show what can be done.

All the hard work of getting the shed smartened up, organised and ready for action was clear for everyone to see.

There was even a celebratory cake, soup, sandwiches and cups of tea to give much cheer to those who came along.

It has taken over a year to arrive at this official opening and we are delighted to have this community facility at Cressing, to complement our other volunteering opportunities. With very little money but a great idea and a few willing and determined volunteers it just goes to show what is possible and what can be achieved. If you would like to know more about the Shed or are thinking you might like to join, visit their Facebook page or come to Cressing Temple on a Tuesday or Thursday where there will be somebody to tell you more. You can also find out more about the whole idea of Mens’ sheds and how it came about at the Uk Mens’ Shed Association website. And our shed is not just for men so if you ladies out there have a hankering to bash in a nail, turn a bowl or make a planter for your garden why not come along?

It is always nice to be able to take our Cressing Temple gardens a bit further from home, and I had the opportunity to do this a couple of weekends ago when I gave a talk at the Nottingham Hardy Plant Society., called ‘Plants with a Purpose’. The invite came from my sister, a committee member for the Nottinghamshire Hardy Plant Group, who needed to fill a gap in their speaker programme (nobody much wants to come out in January!), which I duly accepted. 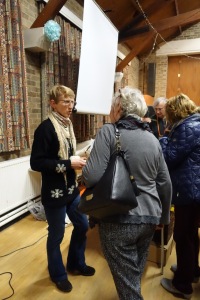 And what a lovely occasion it was, with a  friendly, interested audience who made me feel very welcome. My talk was called ‘Plants with a Purpose’ and I used the opportunity to introduce the walled garden and explain the many fascinating uses to which the plants have been put in the past. but I was surprised and delighted to find that one or two members had already visited Cressing and knew the garden. Let’s hope we see a few more of them this summer.

The Nottingham Hardy Plant Group has been going for an amazing 42 years and has a thriving membership of about 120 plant enthusiasts. The group meets for monthly talks in the winter and for regular visits to gardens in the summer. They are also lucky to be responsible for the care of a botanic garden at Wollaton Deer Park and Hall in Nottingham, a delightful and beautifully maintained  garden, 100 feet by 50 feet and surrounded by a 10 foot high brick wall. They grow plants from 50 different genera and they are all labelled meticulously. 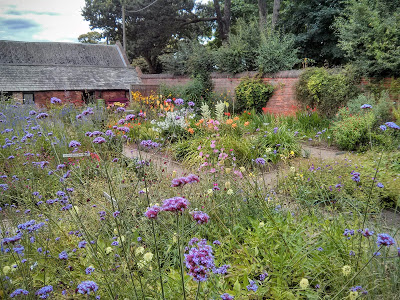 The botanic garden is open on Sundays from 2-4pm from spring until autumn and would be well worth a visit as they sell their plants too! Take a look at the Notiingham Hardy Plant website for more information.

The Friends Group is now the proud owner of a 36L apple press, an Ebay bargain not to be missed.

If you remember, we won some money at last autumn’s Garden Soup for an apple press to turn some of next year’s wonderful apple harvest into Cressing Temple Apple juice. Well, now we have come a step closer to that goal. Strange to be thinking of harvesting apples when it is only January, but knowing how quickly time flies we will soon be heading towards our next Apple Day on 14th October. Put it in your diary and come along for a taste of the 2018 vintage.

Well, having started this blog with a comment on this morning’s gloomy weather, I have just spent a glorious afternoon in my garden, with the sun shining and birds singing as though Spring is here already. A day is a long time in gardening!